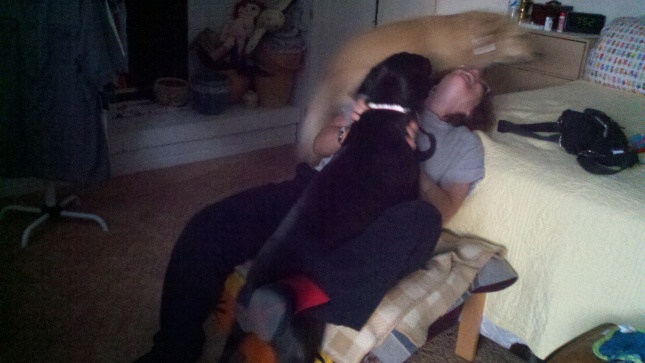 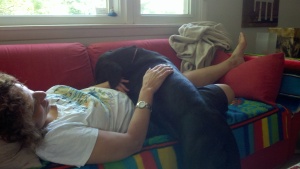 Lulu won’t let anyone near me! “My Mommy!” she growls.

My understanding is that both the humans and the animals were losing their minds by the 5th day I was gone.  The animals were being so annoying they just wanted someone, anyone, to pay attention to them.  I heard that Sofie actually started hitting Louise in the head to get her to play.  While I was gone my daughter took some pictures, so I will have to see them to understand some of the antics.  I did Skype with Muffin and Nine but they were not very talkative; the dogs were at daycare, so I missed them on the call.  The report was that the dogs actually did sleep until like 8 AM which never happens when I am home (very interesting).  Like JetLag (which takes a major toll on your circadian rhythm especially when you were 14 hours ahead and now you have to come back), MommyLag is similar.  It takes time for everything to return to ‘normal.’ Right now both humans and animals want to be near me a lot more than usual. Sofie won’t let me out of her sight.  Lulu wants to crawl inside me and keeps one paw on me at all times.  I’ve read that JetLag takes one day for every hour you need to readjust, I wonder how much time it takes for MommyLag?  I am sure the humans will be back to taking me for granted way before the furballs do.  Nice to be home.