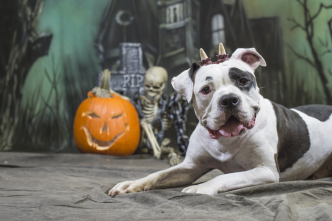 BOO! Don’t Be Scared – When all Hallow’s Eve is upon us, protecting our pets is just as important as keeping our kids safe on this night full of pranks, tricks and treats. Similar to holidays like the Fourth of July, or any other event full of loud noises, bright lights and unusual, out–of-the-ordinary colors, Halloween can be frightening for some pets.

A constant stream of strangers showing up at our doorstep, knocking, banging and ringing the doorbell, combined with the unfamiliar sights and sounds coming from outside our front door, can be alarming for some animals. On the other hand, my dog is overjoyed to see people constantly coming to the door since my slightly spoiled canine believes these trick-or-treaters have arrived for no other reason that to play and be petted, not receive candy.

Out and About – Many families dress up as a group for Halloween and this includes putting their canine in costume and taking them out for all of the festivities. When you’re considering an outdoor outfit for your pet, look for those with reflective tape, like skeleton costumes with glow-in-the-dark bones. Even if your pet’s couture isn’t illuminating, consider including bright colors, battery-powered lights or reflective items to make them easier to be spotted in the dark.

Think about different dogs and cats filmed for TV shows, commercials and movies. You may not have noticed, but they’re almost always lighter-colored animals. That’s because they’re more easily visible and don’t blend in with darker backgrounds. Consider yourself the director and costume designer on your Halloween set and make sure your animal doesn’t fade away from being spotted, especially outdoors during evening hours.

Deceptive Decorations – While trolling around on Halloween, it’s not uncommon to see some pretty realistic, convincing decorations that can resemble anything from rotting corpses to headless horsemen. But for anyone who has seen a crime or mystery drama on TV, sometimes these props look remarkably realistic, and in some rare cases, they are exactly as they appear despite the hype and holiday.

For example, if your dog were to come across a dead moles on Halloween, we might just laugh it off as a decorative part of a pet cemetery. But deceased animals carry a number of different dangerous diseases and significant health problems that could be easily transferred to your pet through their decaying carcasses. Keep an eye on your canine when they pay too much attention to a Halloween display.

Scary Candyland – Another part of this sweet holiday comes with the mounds of candy that can be found practically everywhere, even discarded in the streets. Pay particular attention to wrappers that could contain remains of chocolate and other dangerous threats to our pets. We all know that cocoa can be deadly for dogs and cats, but there’s another ingredient that can be even more dangerous, XYLITOL! 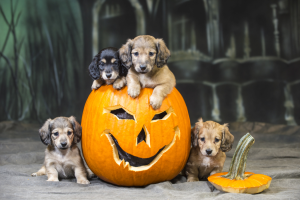 Xylitol, an artificial sweetener found in some candies, gum, baked goods and even toothpaste, can cause consequences for our critters in smaller doses when compared to chocolate. Just like cocoa, it will take a fair amount of the particular ingredient to prove deadly, but Xylitol and chocolate can still cause significant health problems if accidentally ingested.

Don’t be overly frightened this Halloween that your pet will have problems when you can be there to help protect them from harm. With a little bit of planning and preparation, some supervision and awareness will ensure we all have a great time during all Hallow’s Eve.

Hope You Had A Happy Halloween Everyone!