Monday Mischief: Another in the series of ‘That Can’t Be Comfortable”

Another in the annals of ‘That Cannot Be Comfortable.’

And you should have heard her snoring!

I find it so calming to watch animals sleep. They seem to sleep with such abandon. The animals always seem to be sleeping in weird and different places in the house. I think I was drying a rug on top of the washing machine and he decided it was comfy.

Golden slumbers kiss your eyes,
Smiles awake you when you rise;
Sleep, pretty wantons, do not cry,
And I will sing a lullaby,
Rock them, rock them, lullaby.

Care is heavy, therefore sleep you,
You are care, and care must keep you;
Sleep, pretty wantons, do not cry,
And I will sing a lullaby,
Rock them, rock them, lullaby.

‘Golden Slumbers’ is a lullaby from Thomas Dekker’s 1603 play Patient Grissel, written with Henry Chettle and William Haughton. You may recognize it because The Beatles used it in their song of the same name on their Abbey Road album.

Caturday: Can You Stop For A Moment, Stella?

Trying to capture a picture of Stella is like trying to get a good shot of lightning in the sky.

I cannot imagine a life without cats!

Please remember to always take your keys if you leave dogs, or children, in the car.

It may seem funny but luckily no one was hurt. Stay safe out there! 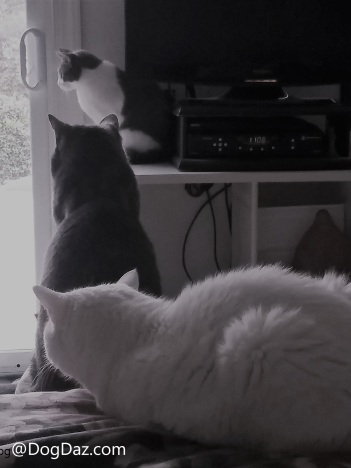 A rare moment with Noel, Nine, and Mini Cooper all looking out the door probably at a squirrel or bird on the deck.

It is not often that these 3 do anything together, and definitely not cooperatively. According to my research, there may exist a very loose dominance hierarchy amongst a group of cats, but they do not form an interdependent hierarchy as dogs do. That means that they do not have a pack mentality, though they can gang together for survival, usually around food (hence feral cat colonies in the wild). The other interesting thing I learned today is that cats have relatively limited ability for complex visual signally, which we see in other animals that form social groups, because cats largely developed as solitary hunters, without the need for complex social interaction between each other. Not having this signally ability can lead to more fighting (basically they don’t understand what the other wants). It is all starting to make sense to me now…..

Caturday: Nine is Sweet on Lulu 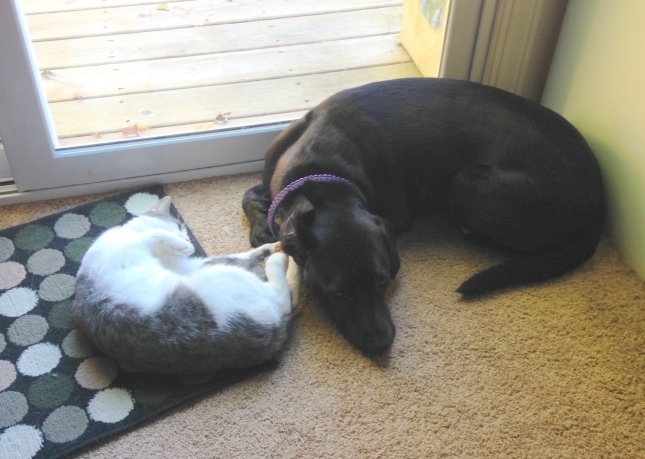 Nine has always been sweet on Louise. Here is a snap from 2014 where he is trying to play with her. 6 years later and he still gives her kisses and love and tries to get her to engage. This picture could have been taken yesterday (Louise actually has that collar right now too) because he is still poking at her.

I cannot imagine a life without cats! 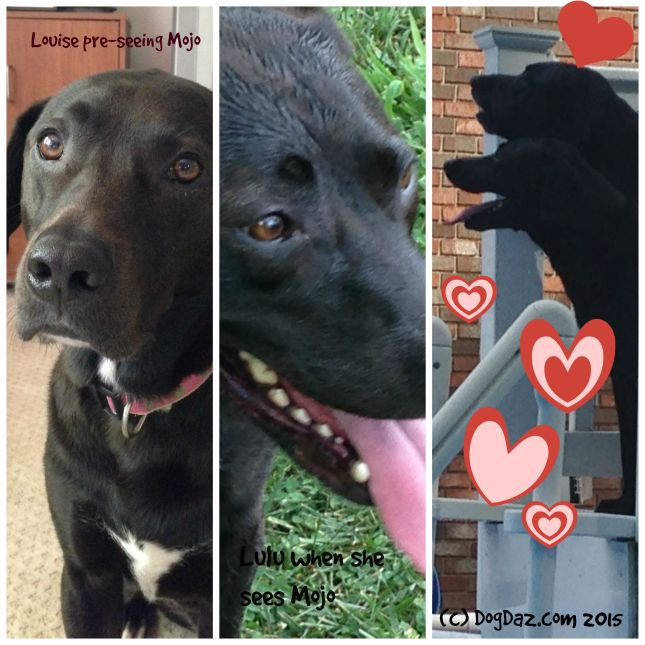 Louise before seeing MoJo – Louise when she sees MoJo

Louise’s love is the boy next door, his name is Mojo Rising (he is a big handsome black lab). Louise has loved Mo since she first laid eyes on him: he was 2 she was a puppy. So many years later they still have a thing for each other, except now it is a familiar sniff and a little extra wag in the tail. Louise doesn’t warm up to many dogs, but he is the wind in her sails.