We have reached the DogDaz of Summer. Those hot hot Mid-Atlantic August, thunderstorms every day, days. The dogs don’t mind so much. (Which is wonderful because Sofie and ultimately Louise, were terrified of the T-storms). They wander around the yard, which for the littles is a ton of space, and stay in the shade. Charlie mostly does his thing and after 10 minutes wants to go inside to the A/C. Jolie is still discovering that there is a wonderful world outside of a cage (after 6 1/2 yrs), so she never wants to go inside no matter how hot it is.

Jolie is now my permanent office assistant. She finds all the stuff I drop on the floor during the day. I discovered she likes to chew ballpoint pens. Mini, who used to always be my desk assistant, is currently on strike and is not showing up to work. Hopefully, that will change.

Mostly I find Jolie sleeping on the job. But, I enjoy her company and she is fitting in the routine perfectly. 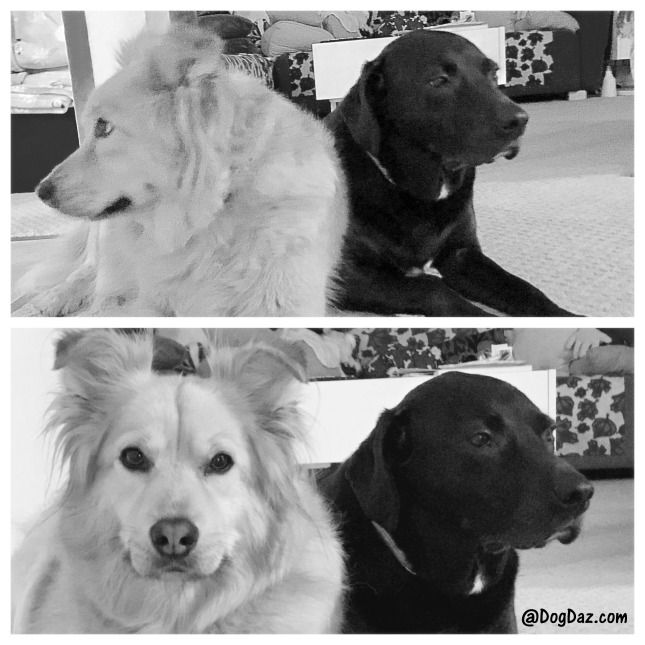 I threw out all of Louise’s sweaters and coats today (after 12 years she had a lot). I also got rid of Sofie and Louise’s yellow slicker raincoats too – I loved those (I put one in the thrift store recycle bag, but I don’t know if they will use it). The little dogs have no use for that stuff. The shelters don’t want the used coats or leashes, collars, and harnesses. And they don’t want the beds either, I checked. I have all these big dog beds that I can’t seem to just toss. Last Christmas I got Lulu this beautiful orthopedic one that she loved. So it is sitting against the wall of my office until I can figure out where it should go.

And what do you do with raised feeding dishes? No one wants them. Many of the leashes and collars had their names and my phone number on them so they went in the trash. My heart is just aching. I kept a few things to see if I could make coats for the littles, or maybe because I just couldn’t part with it all yet.

The picture is Louise and Sofie in 2018. Gosh, I miss those goofballs.

Mr. Charles got a haircut today. He always looks so handsome, but today he looks kind of grumpy. He doesn’t always like to pose, but that is the life of a beautiful dog. 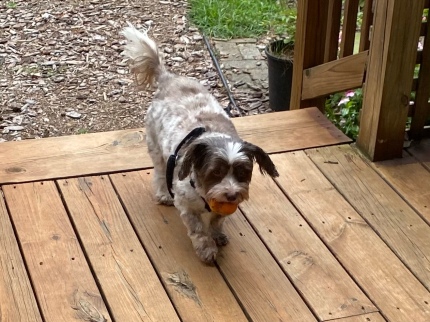 Jolie discovered the tomato garden all on her own. I never had a dog that ate our tomatoes before. I read that they are fine for dogs to eat, just not too much because of the acid. She was very proud of herself. Now I guess I need to put a fence around the veggies.

Facebook makes these little videos that come up on my feed. This one, of Mini Cooper, was really sweet.

Have an awesome Wednesday. 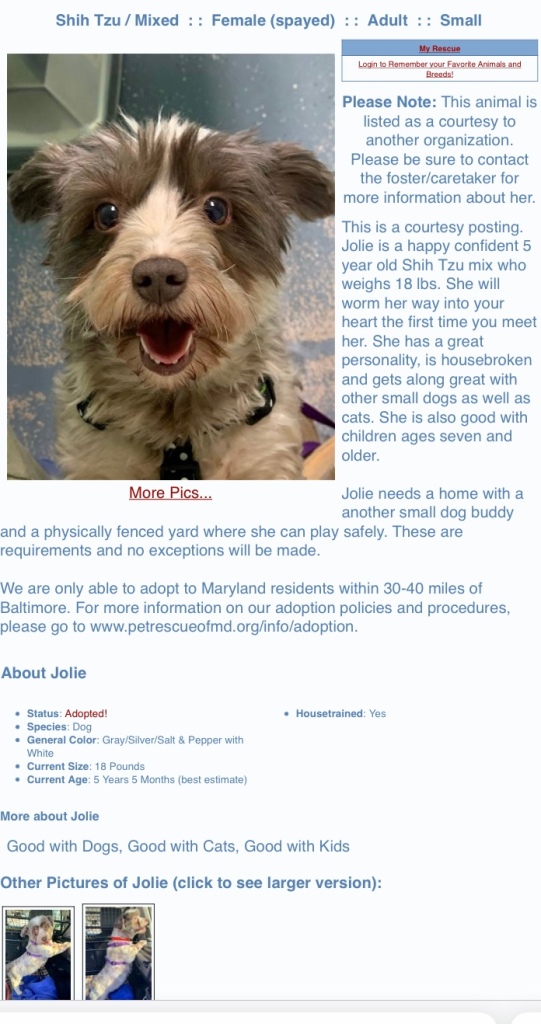 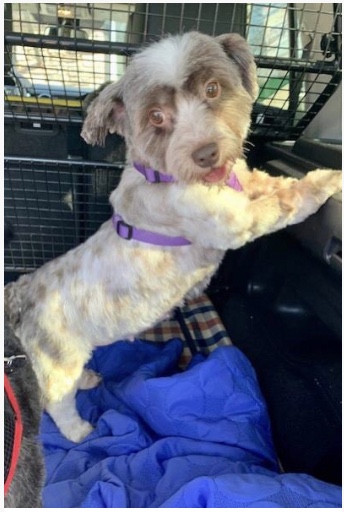 The story that we were told by the rescue:

She came to us in the pouring rain and looked like a MOP with paws. She has the sweetest personality for someone who has been locked up for years. The adoption paperwork says her birthday is February 14, 2016  (which is the same day as our boy, Nine, the cat who just left us in March), but that would make her 6 1/2, not 5 1/2. What a very long time to live in those horrible conditions.

They were right about her personality. Mini Cooper, the cat, liked her immediately, Charles, the Pomchi, was OK with a youngster in the house (he’s 14), and after a week or so, even Noel, the Christmas Cat, at 15 1/2, decided that she was OK.

The first order of business was a haircut. After all the hair was gone, the MOP showed us her spots (she looks like an appaloosa). Such a difference. I think she really liked being freed from all those mats. Sonya, who groomed her, said that her feet are burned, most likely from standing in all that uric acid for so long. She doesn’t like them touched much and gave Sonya a fit to trim them, so I try to hold hands with her to get her comfortable with her feet being touched. 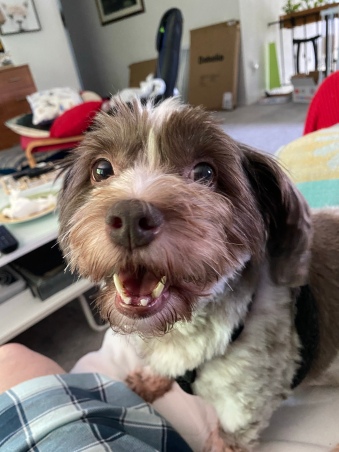 Jojo went to the Vet last Monday and we found that she had a fractured molar and several rotted teeth, is overweight at 21 pounds (should be 17 or 18), has an ear infection, some skin problems, and loves everyone. You know what that means: Cytopoint injection for the skin, ear drops twice a day, exercise, and an appointment in October (because that is our Vet dental month with a 10% discount) to fix the teeth.

Even though she is 6 1/2, it is like having a puppy because of her lack of training. I take her out, she pees, and then immediately comes in and pees on the rug. She does not like the feel of grass on her feet (is it totally new to her?) so I am teaching her that it is ok. When she is kenneled and I am not in her line of vision, she screams. There is a lot to learn in this world. She absolutely loves her walks in the morning and wants to constantly go outside with me (though she does nothing but sniff).

She is sweet and loving and happy. Now to teach her what a toy is and how to behave in public.

Oh My Dog! (OMD) That smile almost makes you forget all the accidents in the house!

We are smitten with your smile, Jolie.

2022 has been a rocky year for Charles so far but it is only going to go up from here (or so Mom says).

14 years young in little dog years hopefully has a lot of runway left for adventures and treats. 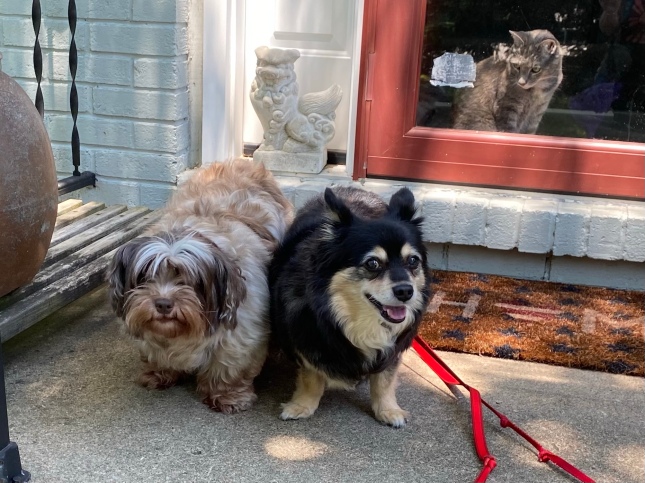 For Charles’ birthday (well, maybe more so to help Mom’s heart heal from the loss of so many furbabies over the last few months), a sweet matted soul named Jolie has come to live at the zoo. The minute she got here on Saturday (in the pouring rain, of course), she took over everyone’s heart (and Mini’s couch pillow). Noel is still a little suspect of the new ‘MOP’ in the house but otherwise, she just fit right in as if she had always been here.

I will tell you her story another day, but for now here are the main things we know: