RSS
← Sunday Comics
Why Are My Readers Disappearing? → 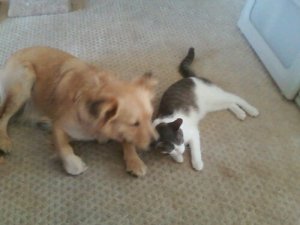 Nine and Sofie being lovey dovey

Nine, the kitten, thinks he is another dog in this house.  He wants to be wherever Sofie is.  He runs more with the dogs than the cats.  It is really cute how attached he is to Sofie, and she him.  I have always had certain cats that really liked the dogs (Kitty loved Squash E), but never to this extent.  I really need to be careful because Nine tries to go on walks with the dogs and me, and he always is at the doors watching them.

Stella & Nine at the screen door

Cats do not go outside in my house.  It is to dangerous a world in the street and I do not have the energy to deal with them getting killed or just plan hurt.  But Nine…. he just really does not like being away from Sofie.

Sofie teaching Nine how to escape

So she decided to eat a hole in the screen so that he could get out of jail.

And, off they went.

Stella, the baby kitty, did not even try to follow.  She knows the rules.  Nine and Sofie, on the other hand, are my two trouble makers.

Just another dogdaz morning at the zoo ❤

← Sunday Comics
Why Are My Readers Disappearing? →