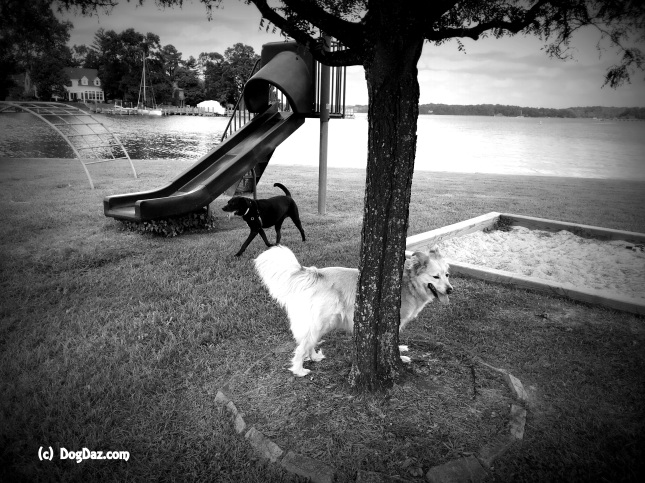 Other than our own fenced yard, there are not many places that we can run off leash. There are always so many people around and other dogs that Mom is afraid that we, or she, will get into trouble. Mom takes us down to the very end of the peninsula, we live between 2 creeks off the Magothy River, where she feels comfortable with our antics. If there are no people or animals around then she lets us go because we are locked in on 2 sides by water and the 3rd side by her. This is our favorite free run place because we can chase ducks and geese and cranes and cormorant and still not get in trouble. Once Sofie jumped into the water and Mom had to go in after her, but that doesn’t happen much. Sofie is too short and heavy to pull herself up the bulkhead and Louise hates water. Mom doesn’t let Charles run free here though because she worries that (1) he would drown if he fell in, (2) the Osprey would pick him up quickly, and (3) we would roll him down the grass and throw him in the water.

Running free is great fun and we wish there were more safe places to do it. Mom used to take us to the dog park but there were so many aggressive people and poorly trained dogs that we found it more stressful than fun. We just want to run around with Mom for a little while that’s all.

Do you have a free run space that you like? Where is it?

Have a wonderful Black and White Sunday. 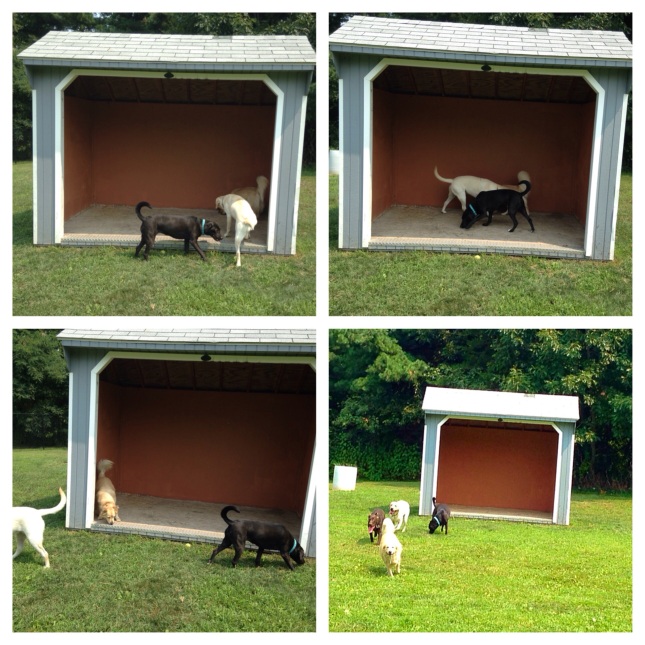 When we got to the dog park there was this weird building in the yard.  We don’t know where it came from or who brought it.  Louise and some of my pals went to sniff it out.  Mommy says it is a quick place for us to go if it starts raining or worse, thundering.  It smells OK, so we may need to mark it with our scent a few times to tell others we have been here and checked it out.  – Sofie Bear

Sometimes when we go to the dog park it is filled with black dogs, other days it might be brown dogs, or Shepards, or Pit Bulls.  Today was a Labby day at the park.  We don’t mind who is there – we are mutts and have a little bit of everyone in us, so we are all family!

What mischief are you getting into today? 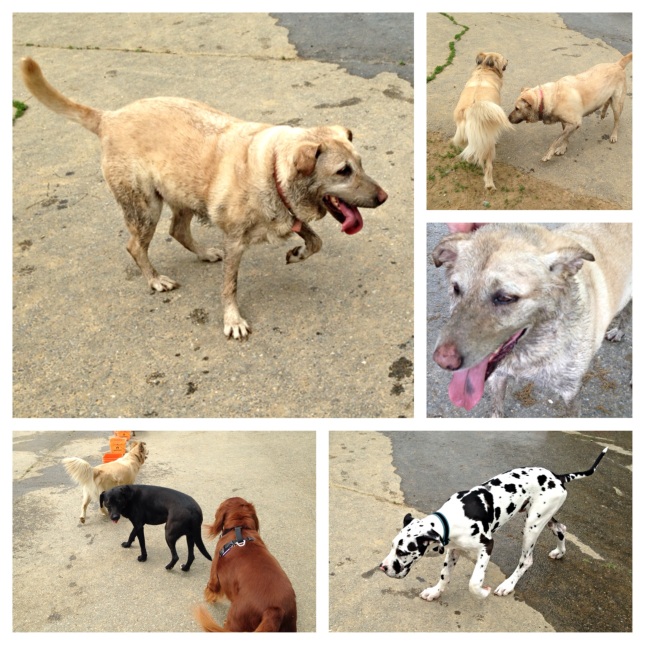 The dogs made a lot of new friends at the dog park last weekend.  One friend stands out though. Sandy, a 9 year old yellow lab who was just rescued from the animal shelter only hours before.  To show her new Mommy what a fun girl she is, she found the only deep mud puddle in the park and proceeded to roll full body in it.  Sandy, we wish you and your new Mom lots of puddles, cuddles, and sunshine.

Monday Mischief: The Only Blond In Town 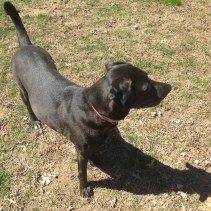 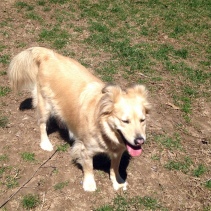 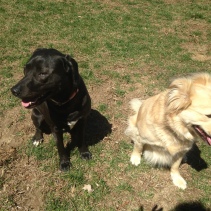 Sisters at the Park 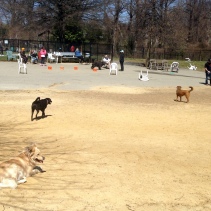 It’s black dog day at the park except for me at the brown dog. 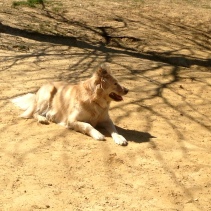 Sofie and the tree shadow 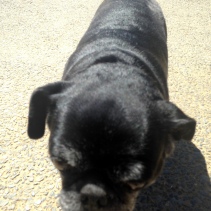 The cutest little girl of the day. 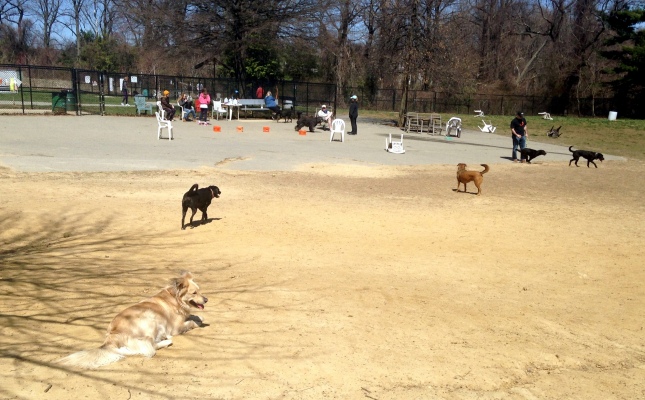 It’s black dog day at the park except for Sofie and the brown dog.

Can you count all the black dogs?

There are 6 that you can see here, but there were at least 5 more behind us, and then a few more came after this picture was taken. 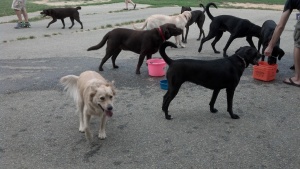 It must have been BLACK LAB day at the dog park.  There were like a million dogs and most of them had  Labrador Retriever somewhere in their blood line (or so it looked like).  There were a zillion black, 2 browns, and few yellows but mostly Labs.  Little Sofie was actually the smallest of the pack, not that she minded. 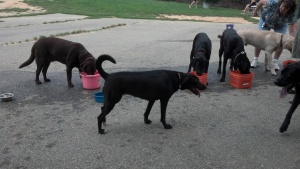 Going to the dog park is always kind of hit or miss thing for us.  Some days there are only a few dogs, or even none, but this time there were many.  It is hard for me to tell whether the girls really enjoy it or not.  My dogs stay very close and tend to avoid getting into it with others.  Lulu will run to see what is happening when a whole bunch get loud and snarly, but I usually call her back before she gets to close to that kind of action.  Sofie gets hot really fast, especially on humid days, which it was, so she runs and then takes to sitting under my bench in the shade.  Dog parks actually kind of scare me.  There are times when I go and some dogs get stupid, and then owners get stupid, and it is just not fun.   This time was good.  They were tired, which was what I wanted, and they were ready to go home when I was.  I always enjoy seeing all the different breeds of dogs usually at the dog park but it definitely was Black Lab day this time. 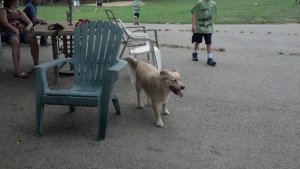 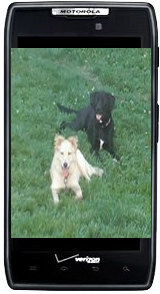 I have a new phone.  Did I tell you that my Blackberry went headfirst into the toilet a few weeks ago, tumbled out of my pocket – kurrrrrplunk! and there was no saving it (how embarrassing that I am airing this in public).  So now I have a Motorola Razr that I have absolutely no idea how to use.  I got it because my daughter has one, so I figured she could teach me (teenagers are so much quicker at this).  The reason I am blogging this fact is because my pictures are terrible lately.  The phone is so big that I don’t know how to hold it and snap a shot and the resolution is hard to get used to.  Also, getting the pictures from phone to computer seems to take a true Rocket Scientist (which I am not). So dear Readers, my apology before hand for the blur, whir, streaks, and sunspots that you may see on DogDaz until I figure this thing out.  I could of course get a real camera, but that would make to much sense.  I am having a love/hate relationship with the thing.  Every time the dogs or the cats are doing something cute, it takes me so long to get the thing going that I miss the moment.  Well, in the weeks ahead, you get to be the judge.  If you want me to go buy a real camera, let me know.  Just another DogDaz morning at the zoo. 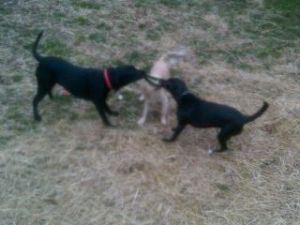 3 dogs and a frisbee

Today we went to the dog park, partly because it is unseasonable warm and great to be outdoors in January, and partly because I had a tooth pulled yesterday and did not feel like walking (because yesterday’s walk made it bleed a lot).  So off we go in the 2001 Ford Explorer, which I only use for dogs and hauling big things (I bought it off my stepson specifically for this purpose) (my regular car is a Prius Hybrid), up they jump (pretty much knowing we are going somewhere fun) and to the dog park we go.  Now on a lovely Saturday morning you know that the dog park is full to the brim of every imaginable dog.  Louise and Sofie ran along and had a great time only occasionally checking in to make sure that I am still somewhere around (of course Lulu checks about every 2 minutes, but today Sofie checked a few times too today (this to me is success)).  So, I am sitting in the sun on a nice chair when up jumps this Boston Terrier right in my lap (dirty paws and all).  Well, Sofie and Louise come running over to make sure that this interloper is not bothering Mommy and then off they went again.  Nice to know I am well protected by my pack.  We were at the park about an hour when some male boxer/pit mix starts messing with Sofie, which I could see was making Louise protective/anxious, so I got the leashes and decided it was time to go.  For some reason there always seems to be a spoiler at some point when we are at the park and the owners don’t see anything wrong with their dog’s aggressiveness.  Amazingly, Sofie was ready to go anyway, which was a relief.  They were like a different set of dogs walking back to the Ford then when we first arrived.  I only had them on their neck collars and leads and going they pull and pull and pull me to the park, but leaving, you would think I actual had trained dogs with how nice they walk.  Back in the Ford, back down the road, and right in the house.  TIRED DOGS ARE HAPPY DOGS, and now I can put away the outside holiday decorations without two crazies under foot.  Feels like someone socked me in the face, so maybe I should follow the dogs lead and take a nap instead though.  Just another DogDaz Saturday with my zoo. ❤