I felt like starting something new to help the strays.  I am calling it Feral Friday.  I stole the idea from Jackson Galaxy.

I can not imagine a life without cats.

We arrived home today after 15 hours of flying around.  It is so nice to be home to my own zoo and I am really looking forward to sleeping in my bed.  Before I turn in, I thought I would share some more cats from my trip to Jerusalem.  If you have not seen the previous cat post this week please check it out – an incredible 2 million cats and I would like to take pictures of every one of them.

Just another DogDaz morning at the zoo.

DogDaz Zoo from Jerusalem: The City of Cats

Meet Shoshannah.  She is the little feral kitty that Peanut adopted at Hebrew University in Jerusalem, Israel, where she attends school. Shoshannah is about 6 months old and lives in the yard outside Peanut’s building along with tons of other cats. The students are told to not feed or interact with the cats, but how can you leave them  alone when they crawl all over you when studying outside and meow sweetly for attention.

If you have not been to Jerusalem, then you are probably not aware of the massive cat problem that they have. “Cats were not prominent in Israel’s streets until the 1930s, when they were brought in to help eradicate a rat problem, but this decision ultimately caused a “cat infestation” in and of itself. No one knows exactly how many of the street cats live in Israel now, but estimates say about 2 million, according to Meow Mission.”

Everywhere you turn, under every bush, in the buildings, in the streets, there are cats. 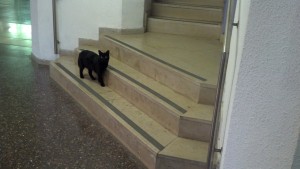 Cat in the Humanities Building at Hebrew U

It is always amazing how we humans try to solve one problem and just create another. I never knew that Jerusalem was the city of cats.  There is a very nice site on Tumblr that has lots of pictures of the Jerusalem City Cats, if you would like to see more.

There are all varieties of cats – long and short hair, calico, tortoiseshell, gingers… it is sad that there are so many homeless kitties, but at the same time, very neat to see how the people have rallied to try to feed and care for them (at least at Peanut’s school).

Do you know of other cities with cat problems?  This is on a scale that I never thought of before.

Istanbul, Turkey is a beautiful city. The city is actually where the European and Asia continents meet and is divided by the Bosphorus Strait.  A fishing town, you would expect to see cats.  But there were feral cats everywhere.  In all the outside spaces and many of the indoor also.  The street dogs, though I did not get to take many pictures because mostly I was being whizzed by in the Taxis that go way to fast, seemed to be of Shepard, working dog, type bodies, with brown and black short fur.  “One estimate is that in Istanbul, a city of 11.3 million people, there are at least 150,000 free-roaming dogs.  Rabies is endemic in Turkish dogs and every year there are a small number of people who die from the bites of rabid dogs. The Turkish federal government passed a law a few years ago requiring cities to control the roaming dogs.  But as in America, few cities have all the resources they need to effectively control the loose animals.”(Managing-street-dogs-cats-turkey)

I was really glad to see stray dogs with ear tags.  It made me realize that the city may have a “trap and release” program to spay/neuter/vaccinate strays.  I checked and it does and I think that is a  great step in the right direction, especially after reading about some of the shelter tragedies in Turkey. Unlike Americans, the Turkish people appear to tolerant the free-roaming animals. I assume that has a cultural basis due to religious heritage and current beliefs.  Until this trip, and I travel a lot, I never really thought about another countries challenges with animal control, this is a huge problem worldwide. In Istanbul there appeared to be a calm coexistence (I did not see even one cat/dog fight).  Lessons from the street animals of Istanbul.